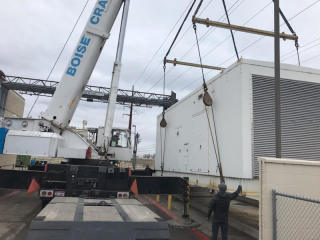 Asset Disconnect & Removal Scope of work:
Iron Flag Power Systems completed the following scope of work. Electrically & mechanically disconnected, de-installed and removed the assets listed. Client had their electrician disconnect and safe off equipment. All cabling was left for IFPS to pull.

IFPS provided insurance, and was responsible for collecting the insurance of all subcontractors. Glycol piping and electrical conduit were removed – except for runs that were inaccessible (above drop ceiling, in between walls and floor, and/or obstructed by sprinkler lines or ducting

FPS removed, packaged, transported and disposed of hazardous material according to local state and federal requirements. IFPS provided trash disposal, equipment for removal, and trucks for freight. Electrical feeders, and copper piping associated with the data center were removed and recycled. Equipment was purchased in “as is” condition with no warranty expressed or implied.

Client ensured all equipment/material is free from any liens and/or encumbrances. IFPS was not responsible for any electrical or mechanical retrofit or reinstallation of any equipment to the current facility. Work was performed during normal business hours.